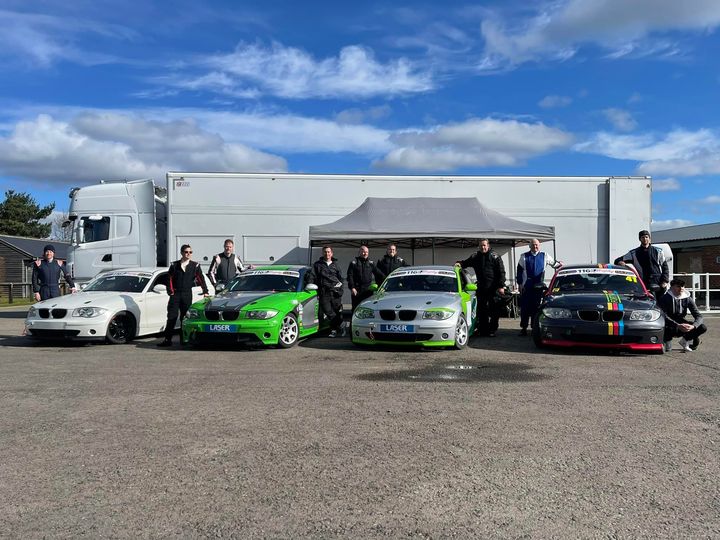 April 10th saw the opening round of the 2022 116 Trophy and for the team it was a resounding success. Fielding a team of almost exclusively new drivers our aspirations were merely to finish and have an enjoyable time doing so. The 4 car entry consisted of two full arrive and drive teams and two managed owner driver teams - a first for Forty40 Racing in the series.

Friday testing went well with all the cars running smoothly all day. Qualifying returned a very solid result for the two A&D teams getting them selves 18th and 20th on a grid of 36 cars. New racers from VMS Racing qualified 28th and an electrical gremlin hampered solo driver Toby Partridge's qualifying changes resulting in a back row start.

The 90 minute race went well for all the team cars. Car 40 driven by Ben Wilshire, Tom Day and Sam Whatley maintained their qualifying position to come home inside the top 20, finishing where they started in 19th over all. The Race Car Radios supported car of Paul Offord, David Edison and Ryan Margolis finished just outside the top 20 coming home in a solid 21st position. VMS Racing owned and driven by staff from VMS LTD (This round Rob Mallett, David Lawrence and Ieuan Evans) finished in 28th. Toby had the drive of the day making 11 places from the back of the grid to bring hi car home in 25th - without the weekend's electrical; problems he would have been much higher on driven pace.

A great weekend was had by everyone, and the reliability and pace of the cars is extremely pleasing. With coaching and testing for all drivers this year we look forward to moving up the grid when we race at Oulton Park in May

← Anglesey 24 Hour Is Go for 116 Trophy!
We use cookies on our website to give you the most relevant experience by remembering your preferences and repeat visits. By clicking “Accept”, you consent to the use of ALL the cookies.
Cookie settingsACCEPT
Manage consent

This website uses cookies to improve your experience while you navigate through the website. Out of these, the cookies that are categorized as necessary are stored on your browser as they are essential for the working of basic functionalities of the website. We also use third-party cookies that help us analyze and understand how you use this website. These cookies will be stored in your browser only with your consent. You also have the option to opt-out of these cookies. But opting out of some of these cookies may affect your browsing experience.
Necessary Always Enabled
Necessary cookies are absolutely essential for the website to function properly. These cookies ensure basic functionalities and security features of the website, anonymously.
Functional
Functional cookies help to perform certain functionalities like sharing the content of the website on social media platforms, collect feedbacks, and other third-party features.
Performance
Performance cookies are used to understand and analyze the key performance indexes of the website which helps in delivering a better user experience for the visitors.
Analytics
Analytical cookies are used to understand how visitors interact with the website. These cookies help provide information on metrics the number of visitors, bounce rate, traffic source, etc.
Advertisement
Advertisement cookies are used to provide visitors with relevant ads and marketing campaigns. These cookies track visitors across websites and collect information to provide customized ads.
Others
Other uncategorized cookies are those that are being analyzed and have not been classified into a category as yet.
SAVE & ACCEPT